After hours GP position available with Dial A Doctor who is the only after-hours home visit service in Geraldton, so expect to have a consistent patient demand and productive shifts. Candidates must have at least two years post-graduate experience that includes paediatrics, accident and emergency medicine, surgery and general medicine. Hours available are Monday to Friday 18:00 - 08:00, Saturday 12:00 - 00:00 and Sunday 24 hours. Nursing home and home visits required. 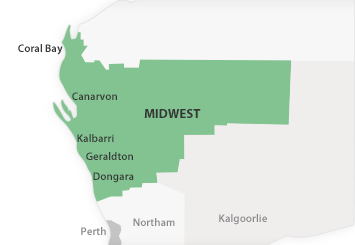 Covering an area of some 470,000 square kilometres, the Midwest region extends from the outback to the ocean. The economic base for the region centres on mining, agriculture, fishing and tourism. Attractions include internationally recognised windsurfing beaches, wildflowers and a rich maritime history of mutiny and shipwrecks.

The region has a population of more than 50,000 people. More than half is based in the City of Geraldton, the region’s commercial, administrative and service centre, around four hours drive north of Perth.

The coastal part of the region enjoys a Mediterranean climate, while the inland experiences warm, dry summers and cool winters.

There are approximately 80 doctors in the region, including private general practitioners, specialists and doctors employed by the hospital and the Aboriginal Medical Service.